The 1st of January was not always the first day of the year in France! During the 6th and 7th centuries the New Year was celebrated on the 1st of March, while in the 9th century – on Christmas Day. The celebration day has been often changed through the centuries. It was the King of France Charles IX who decided to make the 1st of January the first day of the year, with the Roussillon edict.

The saint celebrated on 31 December is Sylvester. He was the 33rd Pope (314-335) and has no link with New Year. It is just a coincidence of the Gregorian calendar. It was under his reign that Christianity was recognised as the official religion of the Roman Empire.

French people celebrate the arrival of the new year among friends with a special feast, called le Réveillon de la Saint-Sylvestre. During this dinner traditional dishes such as pancakes and foie gras (flavored duck or goose) are served on the platter. According to French traditions, this special dinner brings prosperity and good luck to the lives of all those attending the feast.

The President of France transmits his presidential wishes (“les vœux présidentiels”) on the 31st from 8 p.m. At midnight the guests announce their good resolutions for the new year.

The last custom associated with the New Year in France is the offering of “étrennes”or candies and money that the children receive from their family when they visite them to wish them a happy new year.

Post offices, banks, stores and other businesses are closed on January 1st. Outside of tourist areas, restaurants and cafes may be closed. Public transport service schedules vary depending on the city.

The holiday period ends on January 6 with the celebration of Epiphany (Jour des Rois). A traditional type of flat pastry cake, la galette des rois, made of two sheets of puff pastry, filled with frangipane (almond paste) is eaten. 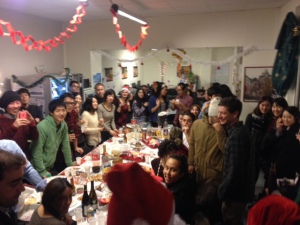 A French school designed for international students who want to study French in France, offers a variety of French courses tailored for each student. For example, Inflexyon has developed an original teaching method aimed at adapting students to French life in all areas. Thus, Inflexyon focuses on oral teaching methods, oral understanding and vivid discussions, creating an ideal environment for meetings with other foreign students, as well as French. If you want to learn French in France, in Lyon, you are at the right place!